The idea of using special K to treat Depression and PTSD?  It is an interesting concept. What is everyone thoughts on this idea?
You can find us at www.miamisobercoach.com
1.800.706.0318

It is either the most exciting new treatment for depression in years or it is a hallucinogenic club drug that is wrongly being dispensed to desperate patients in a growing number of clinics around the country.

It is called ketamine — or Special K, in street parlance.

While it has been used as an anesthetic for decades, small studies at prestigious medical centers like Yale, Mount Sinai and the National Institute of Mental Health suggest it can relieve depression in many people who are not helped by widely used conventional antidepressants like Prozac or Lexapro.

And the depression seems to melt away within hours, rather than the weeks typically required for a conventional antidepressant. 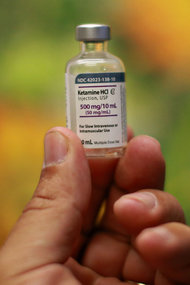 Some psychiatrists say the drug has not been studied enough to be ready for use outside of clinical trials.

But some psychiatrists say the drug has not been studied enough to be ready for use outside of clinical trials, and they are alarmed that clinics are springing up to offer ketamine treatments, charging hundreds of dollars for sessions that must be repeated many times.

“We don’t know what the long-term side effects of this are,” said Dr. Anthony J. Rothschild, a professor of psychiatry at the University of Massachusetts Medical School.

Pharmaceutical companies hope to solve the problem by developing drugs that work like ketamine but without the side effects, which are often described as out-of-body experiences.

On Tuesday, at a medical conference in Phoenix, a privately held company called Naurex reported that its drug caused no such psychotic side effects in a midstage trial involving about 400 patients. The drug, called GLYX-13, showed signs of reducing depression in about half the patients tested. 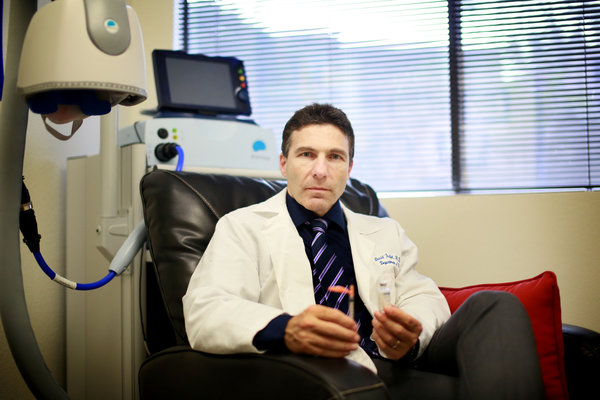 Dr. Feifel is one of a few academic psychiatrists to offer ketamine treatment.
Sandy Huffaker for The New York Times

“It’s definitely the most promising compound in the depression space in terms of effect and durability,” said Harry M. Tracy, the publisher of the newsletter NeuroPerspective, which follows companies developing drugs for psychiatry.

Naurex, based in Evanston, Ill., recently raised $80 million and will start a Phase 3 trial to confirm the safety and efficacy of GLYX-13 next year with hopes of receiving approval from the Food and Drug Administration in 2019, said Norbert G. Riedel, the chief executive.

GLYX-13 is given by intravenous injection every week or two weeks. Naurex is also working on a version that can be taken orally. Cerecor, a privately held company in Baltimore, hopes to have results from a midstage study of a once-a-day pill this month. Johnson & Johnson is in midstage trials of a nasal spray containing esketamine, a derivative of ketamine.

But achieving safety and efficacy for this type of drug can be challenging, and some attempts have failed. About a year ago, AstraZeneca dropped an experimental drug after it failed in a clinical trial.

Some doctors and patients are not waiting for the pharmaceutical industry. Because ketamine has long been approved for anesthesia, doctors are allowed to use it off-label to treat depression. Clinics charge from $300 to more than $1,000 per treatment. Insurance rarely covers the cost. Schedules vary by clinic and by patient, but some patients are treated every few days at first, then every two weeks to two months.

Critics say that severely depressed patients might be too desperate to adequately weigh the risks of the experimental therapy.

“We are talking about a population that is particularly vulnerable,” said Dominic A. Sisti, an assistant professor of medical ethics at the University of Pennsylvania, who was one of the authors of a recent commentary in a journal expressing concern about the clinics.

He and other critics say that some clinics are run by anesthesiologists who are familiar with ketamine but do not provide overall psychiatric treatment. Others are run by psychiatrists who might not have experience administering the drug.

Besides the psychoticlike effects, ketamine can raise blood pressure and heart rate. Evidence from people who abuse the drug indicates that it can cause a decline in brain function and bladder problems.

Some patients say they are ready to take that risk.

“I look at the cost of not using ketamine — for me it was certain death,” said Dennis Hartman, 48, a businessman from Seattle.

He said that after a lifetime of severe depression, he had chosen a suicide date when he entered a clinical trial of ketamine at the National Institutes of Health two years ago. His depression lifted and since then he has gone to a clinic in New York every two months or so for infusions. He started the Ketamine Advocacy Network to raise awareness of the treatment.

Advocates say that the dose used for depression is smaller than that used for anesthesia or by abusers and can be given safely.

Dr. David Feifel, a professor of psychiatry at the University of California, San Diego, said that what is essentially a psychedelic trip is over quickly after the treatment is ended.

“More often than not, they really like it,” said Dr. Feifel, who is one of the only academic psychiatrists to offer ketamine as a treatment, as opposed to in a clinical trial, though only to people who have exhausted other options. He said that if he did not offer the drug, “I’m consigning you to lose another decade until ketamine might be ready. I just don’t feel that presumptuous.”

One of his patients, Maggie, said that when she got her first infusion she was aware enough to change the tunes on her iPod, albeit slowly, but was “transported into a completely different dimension.” She added, “Everything there is completely vibrant or molten.”

The trip ended quickly, but within hours, a lifetime of depression began to lift. “Never ever ever before have I felt like that,” said Maggie, 53, who lives in Orange County, Calif., and spoke on the condition that her full name not be used because of the stigma associated with depression. “I woke up the next morning, and I didn’t take an antidepressant for the first time in 20 years.”

A common refrain among ketamine advocates is that questions about its safety are emanating from drug companies, which have no financial incentive to develop ketamine because it is generic, but see it as a threat to their proprietary products.

“Let’s trash ketamine to justify producing something patentable and turn it into a blockbuster,” said Dr. Glen Z. Brooks, an anesthesiologist who runs NY Ketamine Infusions, a clinic in Manhattan.

Drug company executives say that ketamine itself has too many problems to ever gain wide acceptance for long-term use, especially as an off-label treatment.

There is clearly a need for new drugs. “Almost half of depressed patients are not being treated adequately by existing drugs,” said Dr. Sheldon H. Preskorn, a professor of psychiatry at the University of Kansas School of Medicine-Wichita.

That, he said, is because virtually all the antidepressants used in the last 60 years work essentially the same way. They raise levels of serotonin or one or two other neurotransmitters, chemicals that transmit signals in the brain.

Ketamine would represent a new mechanism of action. It is believed to work mainly by blocking receptors in the brain for N-methyl-D-aspartate, or NMDA, which interact with a different neurotransmitter called glutamate. The blockage sets off a cascade of changes that are not yet completely understood.

“Synaptic connections that help us to cope seem to grow back,” said Dr. John H. Krystal, chairman of psychiatry at Yale and a pioneer in the study of ketamine for depression. He dismissed any suspicions that people are simply getting high and not experiencing a true antidepressant effect, saying the lifting of depression occurs after the side effects end.

Naurex says its drug avoids the side effects because it interacts with the NMDA receptor in a different way, not totally blocking it. Cerecor says its drug blocks only a particular subunit of the receptor.

Dr. Feifel said the biggest obstacle to ketamine use is not the side effects but that its effect on depression wears off so quickly.

To stretch the time between visits, some clinics are now providing ketamine that patients can inject themselves at home, or ketamine capsules prepared by a compounding pharmacy. That is a departure from the standard practice of closely monitoring patients while they take the drug.

The need for repeated treatments has been a problem for Tiffaney Israel-Ritchey, 41, of Lubbock, Tex., who said she was suicidal until she first tried ketamine in December 2012. “It saved my life,” she said.

But she had to stop in October 2013 because she could no longer afford the infusions, which cost $750 to $1,000. Now her depression is back, she said, though it is not as bad as before.