NFL Sober Coach:  Johnny Football hits the rehab circuit. As an Addiction Coach, I sit back and watch behavior and when it comes to celebrity status the media plays a huge role in how they react and act according to what it expected of them. As in Johnny Manziel’s case he was the party boy and he was on a collision course. At The Addictions Coach we specialize in addiction at the sports level. Call us today for college and pro 1.800.706.0318

The Browns took Manziel with the 22nd pick in the 2014 NFL draft and he started two games for Cleveland last season.

Johnny Manziel, the hard-partying former Heisman Trophy winner, started his season drinking alcohol while lying on an inflated swan in a pool and insisted he was living “life to the fullest,” but there was no Super Bowl celebration for Manziel Sunday. The 22-year-old Browns quarterback checked himself into a treatment facility last Wednesday, a sobering choice for the rookie whose season resulted in little more than headlines for his off-the-field antics. The decision was made public by Manziel’s adviser, Brad Beckworth, on Monday morning, and Browns general manager Ray Farmer maintained that the team supported Manziel. “Johnny knows there are areas in which he needs to improve in order to be a better family member, friend and teammate, and he thought the offseason was the right time to take this step,” Beckworth said in a statement. SKIP BAYLESS: JOHNNY MANZIEL IS AN ALCOHOLIC

“Our players’ health and well-being will always be of the utmost importance to the Cleveland Browns,” Farmer said. “We continually strive to create a supportive environment and provide the appropriate resources, with our foremost focus being on the individual and not just the football player.” Browns fans embraced Manziel when he was selected with the No. 22 pick despite multiple red flags being raised about his behavior by NFL scouts. He was arrested for his role in a bar fight at Texas A&M in 2012 before winning the Heisman Trophy, and later pleaded guilty to failing to properly identify himself to police. He was also kicked out of the Manning Passing Academy as a counselor in 2013 when administrators could not locate him. He did not slow down in Cleveland after turning pro. Before the season kicked off, there were photographs of Manziel partying, including one photograph of him drinking atop an inflated swan in Austin, Texas that went viral. 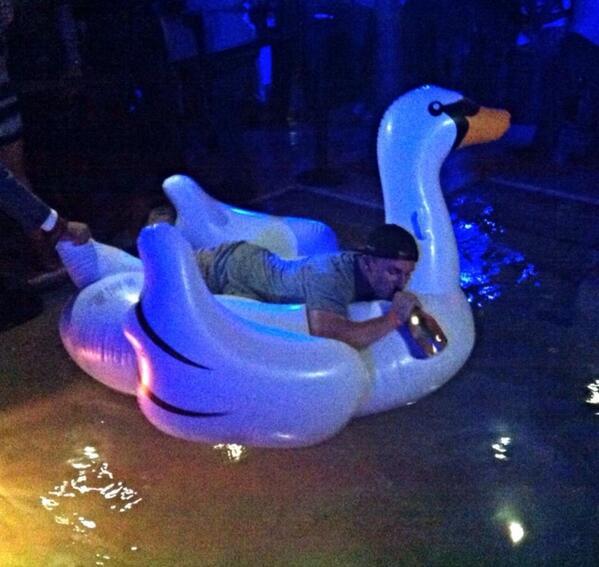 “Real talk, Johhny boy going to treatment isn’t funny yo,” said Arizona Cardinals cornerback Tyrann Mathieu, who previously received treatment at a drug rehabilitation center, on Twitter. “S— is real and it affects all of us.” His on-field efforts were limited to appearances in five games as he was a reserve to Brian Hoyer. He completed 18 of 35 passes for 175 yards, throwing two interceptions and running for one touchdown in two starts. He was fined for oversleeping the day before the Browns’ finale. He acknowledged he had partied too hard the night before. “I brought this on myself,” Manziel said the day after the season ended. “I brought these cameras and all these people that are in this locker room right now, and I don’t think it’s fair to myself, I don’t think it’s fair to anybody in this locker room.”   http://www.nydailynews.com/sports/football/johnny-manziel-enters-rehab-article-1.210039