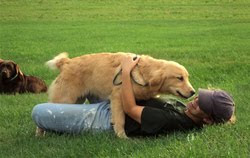 Sometimes we may take for granted our loving dogs or we may not understand how interacting with our canine friends helps us in so many positive ways.  As new information surfaces from studies done with drug addicted teens, it seems our “best friends” have our backs again!
New research suggests playing with dogs can improve the mood of teens being treated for drug or alcohol abuse in a residential treatment center.  Dog therapy may help stimulate the release of the feel-good chemical dopamine in the brain, the researchers say.

“We suggest that the dog interaction activities and/or the dog itself could potentially serve as a non-drug stimulus that may heighten the adolescents’ response to naturally occurring stimuli, therefore potentially helping to restore the brain’s normal process,” said lead researcher Lindsay Ellsworth of Washington State University.

She notes, spending time with dogs may also stimulate the release of natural opioids in the brain.  Playing with dogs could help restore the normal function of brain chemicals that induce pleasure, after the brain’s chemistry has been changed through drug use, Ellsworth adds.

She brought dogs from a local Humane Society to a residential treatment center, Discovery News reports.  One group of male teens brushed, fed and played with the dogs.  Another group played pool, video games or basketball.  Before and after the activities, they filled out an assessment used to evaluate their emotions.

The teens who played with dogs had increased joy, improved attentiveness and serenity, the article notes.  Those who were treated for attention deficit hyperactivity disorder, depression and post-traumatic stress disorder reported their symptoms greatly decreased.

“We found one of the most robust effects of interacting with the dogs was increased joviality,” Ellsworth said in a news release. “Some of the words the boys used to describe their moods after working with the dogs were ‘excited,’ ‘energetic’ and ‘happy.’”