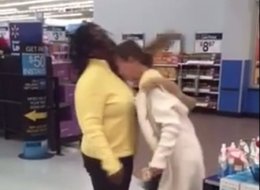 A woman in Deer Park, Texas, has been banned from her local Walmart after allegedly headbutting a tax worker during a disagreement.

The incident happened Saturday night, when Jessica Ablitz got into an argument with Alice Keener, a tax worker at a Jackson-Hewitt branch located inside the Walmart.

The two had a verbal altercation that climaxed with Ablitz allegedly shoving her head into Keener’s chin, Click2Houston.com reports.

Albitz told KTRK that the spat started on Friday when she and her husband went to file their taxes at the Jackson Hewitt branch.

Keener was clocking in while another employee was doing the Albitz’s taxes.

Although Albitz and her husband left without incident, things became heated when she ran into Keener the next day while shopping at Walmart.

That’s when Albitz alleges that Keener mumbled a profanity at her.

“I turn around and said, ‘Excuse me,'” Albitz said, according to ABC13.com. “I did say something back. She came out of her cubicle and followed me to the entrance.”

“Take your poor a** out this store. Your momma is a b****,” Keener can be heard saying before things turn violent.

Albitz and Keener managed to knock over a table and take each other to the ground before the fight was broken up.

In the video, Keener tells bystanders that Albitz started the whole thing.

Keener did not press charges, according to Consumerist.com. Deer Park police are investigating the incident but gave Albitz a criminal trespass notice that says she will be arrested if she returns to that Walmart location.