How N.J. cop, former addict teamed up to tackle addiction

WEST DEPTFORD — Four years ago Ptl. TJ McWain was one of the police officers who found Greg Maurer slumped over his steering wheel in a Wendy’s drive through.

Maurer had become well-known to the West Deptford police as he struggled with addictions to heroin and cocaine and McWain had been there for more than a handful of his arrests.

He was one of many addicts that McWain has come in contact with during his career as a police officer.

As a police officer McWain has been trained how to deal with the criminal, but not the addict. He could arrest someone, hand them a few pamphlets or phone numbers and send them to jail.

“I’ve had people handcuffed to the bench asking for help,” McWain said. “We’re arresting the same people over and over again. I wanted to be able to find something else to do.” 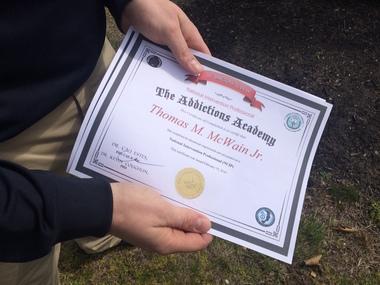 West Deptford police officer TJ McWain has become the first in his department to become certified in intervention. (Rebecca Forand | for NJ.com)

He began researching different ways to help those he is arresting who are obviously struggling with addiction, and his path crossed with Maurer’s once again.

Maurer is now sober and works as an addiction and recovery coach. He connected McWain with Dr. Cali Estes, who runs The Addictions Academy in Miami, which also offers a special intervention and training program for first responders via webinar.

“I never had an officer who asked ‘do you want help?’ They would throw me in a cell because they’ve arrested me five times for the same thing,” Maurer said. “This is something we need to solve. Throwing them in jail won’t solve it.”

“It gives me a lot more information on the psychology of an addict,” he said. “I can understand where they are coming from. When I have an open and honest addict I can get them more assistance.”

The rest of West Deptford’s police department will all be following in McWain’s footsteps as Estes brings her program to the township this summer, opening the training to each of the first responders in the area.

“I’m all for it. We can get the people on drugs help,” West Deptford Chief Sam DiSimone said. “Anytime an officer can help out I think it’s great. Not only for West Deptford, but for everyone.”

DiSimone said McWain’s training makes him a valuable resource in dealing with addicts.

“He will be somebody who can speak to them on a different level, have a better understanding of where they’re coming from and direct them to get help.”

Estes said she hopes to see all first responders in the country eventually trained in intervention services. She offers her first responder classes — which include how to handle addictions among your peers, as well as intervention and family coaching — for free.

“One of the biggest things is that they don’t know what to do with someone who is on drugs,” she said. “You have to get them help. They need to detox. There has to be something else. Instead they get arrested and they either detox or die in jail.”